Tamara Winfrey-Harris’ book answers the question “What is wrong with black women?” with “Not a damned thing!” 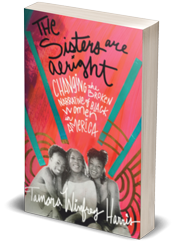 In The Sisters Are Alright: Changing the Broken Narrative of Black Women in America, Winfrey-Harris writes that though black women’s lives are complicated and varied, four persistent racial stereotypes, as old as the presence of black people in America, lead to modern women being problematized by society.

These are the four destructive stereotypes about black women:

The archetype of the portly, asexual and fierce caretaker, brought to life in “Gone with the Wind,” reinforced the absurdity that black women will bear any burden, not because they have to, but because they live to.  The anti-blackness intrinsic to the Mammy caricature has defined expectations for how black women should relate to families, partners, churches and employers—giving and never taking.

“Real” (white) women in the antebellum era were thought delicate damsels. Black women, who worked alongside men, were something harder. By the mid-20th century, the hard black woman was angry, too, and a fussing, emasculating wife on “Amos and Andy” became her avatar. No matter how genial or decorous a black woman is, she is suspected of being a rampaging harridan. Just ask Michelle Obama or Hollywood hit-maker Shonda Rhimes, who was called an angry black woman by The New York Times.

The myth of voracious sexuality helped antebellum society excuse the routine sexual exploitation of enslaved black women. The persistence of this belief makes black women more vulnerable to sexual assault but less likely to be believed when they are violated. Fear of Jezebel also often causes black women to deny human sexual urges to prove propaganda about them wrong.

'The greatest threat to the black community is woman-headed households.' The 1965 Moynihan Report, released by the U.S. Department of Labor, said so. Unquestioning belief in that assessment means single black mothers and their children are demonized. And low black marriage rates can be used as a cudgel against black women, even though America as a whole is marrying less.

With Mammy, the Matriarch, Sapphire, and Jezebel forever in the shadows, black women's lives are constantly depicted through an inaccurate and narrow lens. Many will never experience the struggles that are so wedded to them in popular conversation, and those who do are so much more than their weight, singleness, or thin bank accounts. The current discussion about black women also ignores the many singular and group triumphs of black women and erases the fact that other groups wrestle with the same ills.

The panicked headlines, the relentless racism and criticism by talking heads and know-nothing celebrities, the bogus and biased studies, the self-righteous and snide online memes — they turn African American women into caricatures. "What black women really need," according to Tamara Winfrey Harris, "is for the world, including many people who claim to love them, to recognize that they cannot be summed up so easily."

This article is an adapted excerpt from The Sisters Are Alright: Changing the Broken Narrative of Black Women in America by Tamara Winfrey Harris. Tamara is a journalist, former senior editor of Racialicious, and author who specializes in the intersection of race and gender. She has written for and/or appeared as an expert in The Guardian, Psychology Today, NPR's 'Weekend Edition', and more.

Photo by @createdbyjarrod from nappy.co