Bestselling author and America’s #1 progressive radio host Thom Hartmann peers into the depths of American history that are overlooked, disputed, or erased. In taking this grand arc of history with brevity and wit, Hartmann  offers tools to help us understand how these lessons from history can help us solve today’s big problems.

The Hidden History Series includes ten paramount and timely books that break down the biggest obstacles of today, placing them in historic context and providing real, tangible calls to action both for individuals and society at large. Each book concisely addresses these pressing current issues and offers a set of solutions with “roadmaps” for individuals and communities to follow to create a more equitable and prosperous economy and a safer, more just society for all.

The Hidden History of the War on Voting 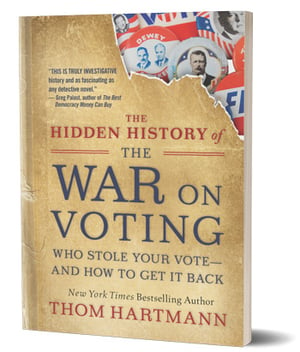 In today's America, only a slim majority of people register to vote, and a large percentage of registered voters don't bother to show up: Donald Trump was elected by only 26 percent of eligible voters. Unfortunately, this is not a bug in our system, it's a feature. Thom Hartmann unveils the strategies and tactics that conservative elites in this country have used, from the foundation of the Electoral College to the latest voter ID laws, to protect their interests by preventing “the wrong people”—such as the poor, women, and people of color—from voting while making it more convenient for the wealthy and white. But he also lays out a wide variety of simple, commonsense ways that we the people can fight back and reclaim our right to rule through the ballot box.

The Hidden History of Monopolies

American monopolies dominate, control, and consume most of the energy of our entire economic system; they function the same as cancer does in a body, and, like cancer, they weaken our systems while threatening to crash the entire body economic. American monopolies have also seized massive political power and use it to maintain their obscene profits and CEO salaries while crushing small competitors. But Thom Hartmann shows we've broken the control of behemoths like these before, and we can do it again. 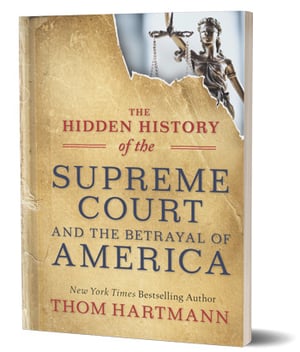 What if the Supreme Court didn't have the power to strike down laws? According to the Constitution, it doesn't. From the founding of the republic until 1803, the Supreme Court was the final court of appeals, as it was always meant to be. So where did the concept of judicial review start? As so much of modern American history, it began with the battle between the Federalists and Anti-Federalists, and with Marbury v. Madison.

The Hidden History of Guns and the Second Amendment 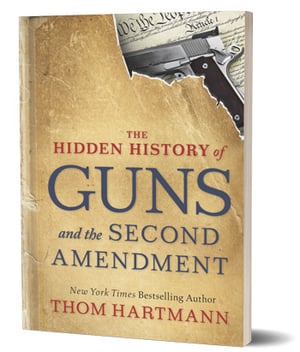 Thom Hartmann examines the brutal role guns have played in American history, from the genocide of the Native Americans to the enforcement of slavery (Slave Patrols are in fact the Second Amendment's “well-regulated militias”) and the racist post–Civil War social order. He shows how the NRA and conservative Supreme Court justices used specious logic to invent a virtually unlimited individual right to own guns, which has enabled the ever-growing number of mass shootings in the United States. But Hartmann also identifies a handful of powerful, commonsense solutions that would break the power of the gun lobby and restore the understanding of the Second Amendment that the Framers of the Constitution intended.

The Hidden History of American Oligarchy 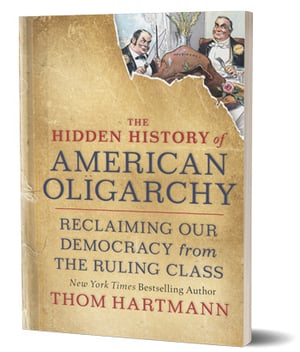 Thom Hartmann traces the history of the struggle between oligarchy and democracy, from America's founding revolt against British aristocracy to the United States' war with the feudal Confederacy to President Franklin Roosevelt's struggle against “economic royalists,” who wanted to block the New Deal. In each of those cases the oligarchs lost the battle. But with increasing right-wing control of the media, unlimited campaign contributions, and a conservative takeover of the judicial system, we're at a crisis point as real and critical as those we hit in 1776, 1861, and 1932. Thankfully, Hartmann lays out practical measures we can take to break up media monopolies, limit the influence of money in politics, and return control of America to We the People.

The Hidden History of Healthcare in America - Coming Fall 2021! 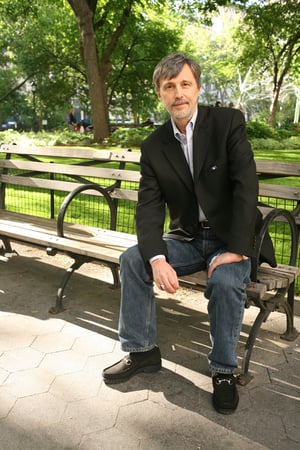 Thom Hartmann is a progressive national and internationally syndicated talk show host whose shows are available in over a half-billion homes worldwide. He is a four-time Project Censored, Award-winning, New York Times best-selling author of 25 books currently in print in over a dozen languages on five continents.

Talkers Magazine named Thom Hartmann as the most important progressive talk show host in America for the past decade, and for three of the past five years, the #1 most important progressive host on their “Heavy Hundred” ranking. His radio show is syndicated on for-profit radio stations nationwide by WYD Media, on non-profit and community stations nationwide by Pacifica, across the entire North American continent on SiriusXM Satellite radio, and on cable systems nationwide by Cable Radio Network (CRN) and Free Speech TV. Furthermore the show is broadcast on its own YouTube channel, via subscription podcasts, worldwide through the US American Forces Network, and through the Thom Hartmann App in the App Store. It is also simulcast as TV in realtime into nearly 60 million US and Canadian homes by the Free Speech TV Network on Dish Network, DirectTV, and cable TV systems nationwide.

As an entrepreneur, Hartmann has founded several successful businesses which still are operating, and he has lived and worked with his wife, Louise, and their three (now adult) children on several continents. He was born and grew up in Michigan and retains strong ties to the Midwest, although he and Louise have lived in New Hampshire, Vermont, Georgia, Germany, Washington DC, and Oregon.