How Decolonizing Wealth Is Challenging Philanthropy to Do Better

Edgar Villanueva’s bestselling debut, Decolonizing Wealth, has created a moment of reckoning for the finance and philanthropy industries.

At a time when less than 8% of philanthropic support goes towards investing in communities of color, Villanueva, a nationally recognized expert on social justice and philanthropy, shines a spotlight on the rampant white supremacist and colonial dynamics at play in our philanthropic and financial institutions. In fact, he writes, many of the systems supposedly put in place to distribute resources, wealth, and power have evolved simply to reinforce a racist status quo.

Although it is a cathartic read, Decolonizing Wealth is so much more than a damning takedown of a broken system. It offers a practical methodology that addresses the root cause of the issue: the colonial past. 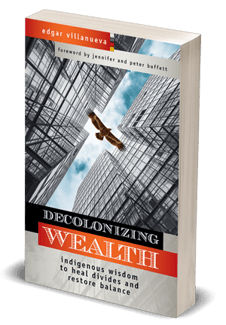 The accumulation of wealth, Villanueva explains, is steeped in colonial trauma. A member of the Lumbee tribe, he draws from Native traditions to chart a course for healing that is inclusive of both the oppressed and the oppressive actors in the system. Through joint healing, he shows, we can rebuild our institutions to serve people, communities, and the planet for the benefit of all.

Villanueva’s seven-step method for healing is compelling—and since the blockbuster release of his book in the fall of 2018, it’s catching on.

Decolonizing Wealth has become a rallying cry in the fight to build a more equitable and inclusive economy. It has become a practical handbook for philanthropists and activists to serve communities and populations better, gleaning insight from complex social movements such as reparations and indigenous rights. And it has ignited a global conversation about altruism, wealth, and power, with Villanueva’s voice joining that of Anand Giridharadas, a critic of the unholy union of global philanthropy and capitalism and bestselling author of Winners Take All.

So, on the first anniversary of its publication, we’re sharing how Decolonizing Wealth is impacting the lives of its readers and  reverberating through the organizations, communities, and populations they serve.

Healing the Self: Coming Together to Grieve, Relate, and Apologize

According to Villanueva, the first step to changing the oppressive dynamics of philanthropy and finance is to grieve.

Villanueva draws from the native tradition of interdependence, which seeks to include the colonizer in the grieving and healing process. Trauma is a part of all our histories. Our collective grief is powerful. In order to achieve mutually assured freedom and equality, we must tackle brokenness together.

Whether we are part of a community that has been historically colonized or we are reconciling how we have generationally benefited from colonization, we must collectively grieve our inherited culture of domination and exploitation. We do this by coming together to listen to one another, understand and acknowledge our roles in the system, apologize for hurts that have been caused, and move forward together.

And Decolonizing Wealth has brought people together.

Readers have called the book “inspiring,” “therapeutic and empowering,” and, above all, “truth-telling in the best form.”

Popular in discussion groups and book clubs, this book has been a powerful conversation starter for colleagues, family, and friends who need to decompress from the disquieting truths about philanthropy’s colonial and racist history. For some readers, it has served as a life- and career-altering text for critiquing philanthropy. For others, it has been a wake-up call to take action and cultivate a culture of #NoExcuses. No matter the personal, political, or professional scenario, this book has created a groundswell that continues to mobilize people around the country who work toward healing racial divides.

How has Decolonizing Wealth impacted your life? Tell us in the comments below.

Healing the Institutions: Representing and Investing in Our Values

Villanueva proposes that half the people who make decisions about where money goes should have intimate, authentic knowledge of the issues and communities involved.

So as part of the healing process, he shows that philanthropic and financial organizations themselves have a responsibility to look inward. Many must revolutionize their current practices, diversify their cultural makeup, and create equity internally.

By following Villanueva’s steps for healing, these institutions have the opportunity to reimagine what decolonized philanthropy can look like: giving that’s truly centered on the needs of the communities they intend to serve.

Indeed, the book has provided such context for Jennifer N., Director of Post-Secondary Success at the Stupski Foundation, an organization working to promote a range of causes including food security, post-secondary success, early brain development, and serious illness.

“As a young woman of color just starting in philanthropy, Decolonizing Wealth has been a seminal text in helping me understand and navigate the challenges and opportunities in the field. I found much of the book to be therapeutic and empowering. I am grateful that my organization, the Stupski Foundation, is using Decolonizing Wealth to help conceptualize how we can become a more equitable foundation. Through Edgar’s book and the work we are doing with the Center for Equity and Inclusion (CEI), Stupski is rethinking the way we work with our grantees and our community.”

Has Decolonizing Wealth had an impact in your organization or community? Tell us in the comments.

Supporting its charter to enable change at every level, Decolonizing Wealth has moved the national conversation around philanthropy forward in new ways.

The conversation about equity and closing the racial wealth gap is not a new one, but in Decolonizing Wealth, Villanueva offers a new perspective.

He argues that we must move beyond focusing on reductive notions of “diversity” and instead shift our attention toward how systems of oppression such as colonization and white supremacy are coded into our most prized institutions.

Philanthropy, as an elite institution, holds the power to move money thoughtfully and intentionally to restore what has been siphoned away from indigenous and diasporic communities around the world. Villanueva offers solutions that can be done now, such as establishing a publicly provided trust fund to newborns based on the research of impacted communities affected by the wealth gap. By centering those most in need, we are creating a culture of reciprocity and an economy of wealth distribution that sees all people as human and deserving of water, food, shelter, a community, and a home. In conversation with David Bornstein at the New York Times, Villanueva points out that mutual reciprocity between communities builds power for those exploited. Reciprocity creates space for possibility and potential. This kind of culture has the power to heal wounds as it requires a mutual acknowledgment of the work being done by those in power and the satisfaction of the community affected by having their needs met.

The book has also provided a kind of thinking for US foundations who are working on global philanthropy. When asked by Dylan Matthews at Vox what US foundations could do to avoid perpetuating the same colonial structures globally, Villanueva said it comes down to truth and reconciliation. While philanthropy in the UK, for example, is deeply rooted in colonial wealth, conversations around these histories and origins are still considered taboo. However, we can start by listening to affected communities and connecting on a deeper level now.

Decolonizing Wealth is a handbook for a revolution. But the revolution is not just in how we approach the institutions and processes around money. It’s a revolution in how we understand our power and responsibility to one another.

By putting those most impacted by abusive systems of power, negligence, and active oppression at the center of our solutions; listening to the needs of the people that have been affected; sharing and redistribute power; and taking action to alleviate suffering, Villanueva’s methodology can and is showing us how to heal our divides, restore balance, and make lasting change.

Edgar Villanueva is the author of Decolonizing Wealth, and a nationally recognized expert on social justice philanthropy. He has consulted with numerous philanthropies on advancing racial equity. He is an enrolled member of the Lumbee Tribe and resides in New York City. He has been featured in The New York Times, Colorlines, and Non-Profit Quarterly.  Learn more at www.decolonizingwealth.com.