Allies, Accomplices, and Saviors: Knowing the Difference to Maximize Impact

I believe that most people mean well. While not everyone may wake up in the morning wondering how they can actively improve the lives of those around them, I do not think that anyone wakes up in the morning wondering how they can intentionally instigate harm or violence. However, harm and violence are still committed by many and received by many more, and I believe it has now become our job as humans to push forward a future in which we each think of ourselves as someone who can add more kindness to the world.

We must counterbalance hate with purposeful kindness, ignorance with mindfulness, and passiveness with activism. If your goal is to support your oppressed peers, you must be mindful of whether your behavior is that of an ally, accomplice, or savior. Sometimes these three overlap and seep into one another, but they are all rooted in the same place: good intentions. If it helps you to think of each of these three tenets of activism in bite-sized portions, think of allyship as “feelings first,” accompliceship as “systems first,” and saviorship as “me first.”

I’m sure you, reader, are reflecting on how your behavior towards your fellow humans in light of the protests against the deaths of George Floyd, Breonna Taylor, Tony McDade, and countless other Black Americans who have been harmed, brutalized and murdered by America’s systemic white supremacy. Perhaps you’ve been doing some reflecting on how you have behaved towards your colleagues, friends, and family who are trans, Muslim, Asian or a member of any other minority community that has navigated systems of oppression and bodily hierarchy for far too long.

The Difference Between an Ally, an Accomplice, and a “Savior”

I am a cisgendered woman, which means that I identify with the gender I was assigned as birth. As a woman with cisgendered privilege, I do my best to educate myself and others on the path to freedom, equity, and equality for trans and genderqueer people who do not identify with the gender they were assigned at birth. I have made missteps in doing so - and quickly tried to correct them - but my heart was always in the right place.

There have been times that I have been a “Cis Savior” and mistakenly put myself in the center of a conversation that was not about me. This doesn’t make me a bad person - it makes me an evolving human who is, like you, doing her best to make a world that is fair and equitable to everyone. But when I have these conversations, I like to keep an eye on where I fall within the Ally, Accomplice, and Savior axis. I’d like to present this mindset to you in the hopes that you can find it useful in making your own judgments on how to be a better change agent. 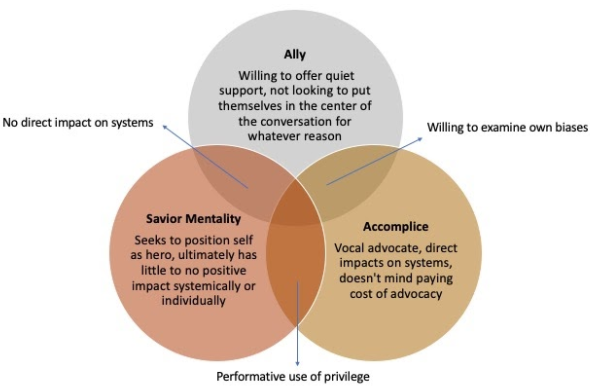 I’m a huge movie buff, so I’ll create comparisons in terms of cinema, and there is no better representation of allyship than Agent Ross in Black Panther (RIP Chadwick Boseman, a hero!). He never centers himself in the conversation and spends most of the movie working with the heroes to protect against the villains. Like any good ally, he’s receptive, open to change, and doesn’t argue the point when he’s called a “Colonizer” from the perspective of the native Africans. He’s aware of what white Americans have done to the resources of their country and continent and is focused on being of aid to rectify this. This is a shining example of the number one tenant of a truly great ally - an ally must be mindful of their place in the system of oppression.

As Tiffany Jana and Michael Baran write in Subtle Acts of Exclusion, an ally must “close the loop” by putting their egos to the side and choosing not to overreact when called out on their oppressive language or actions.

Listen to the message, not the messenger. Extract the useful parts and distill them into something that can influence your behavior for the better.

An ally offers quiet support, never seeking to put themselves in the center of the conversation, and focuses on how they can support the individual who needs support. This is accomplished by self-awareness of how your actions affect others. When someone calls you out on your behavior, take a step towards being a strong ally by taking their message to heart and working on becoming a better friend and confidante.

In the workplace, being an ally can be indispensable to the success of your coworkers. Allyship, when done correctly, improves morale, productivity, and camaraderie in the office. Research shows that mentorship is also one of the most effective relationships for career development with a lens of diversity, equity, and inclusion. What if we were to view mentors and allies as one and the same?

The best way to be an effective ally in the office is to learn how to be inclusive in your thoughts, which will lead to inclusive words and actions. In Inclusive Conversations, author Mary-Frances Winters talks about the importance of inclusivity in creating strong allyship bonds. “Inclusive conversations require the courage to critically self-reflect, to acknowledge what you don’t know, and to embrace a willingness to learn.” Create a space that is as inclusive and open to mistakes as Agent Ross did - who knows? It could help save the world.

Being an accomplice takes a few extra steps from allyship, but the benefit is worth the work. As you’ll see in the diagram above, the overlapping facet of allyship and accompliceship is the willingness to examine your own biases. Once you’ve done this, you’re ready to do the leg work of being a more vocal advocate for change that will, hopefully, have a direct impact on systems of oppression. As Dr. Jana explains in their works Overcoming Bias and Erasing Institutional Bias, unchecked personal biases can inflate to a structural bias that perpetuates the isms - a microaggression is more than a one-time interaction, its endemic to an overall systemic imbalance or inequity.

In film, the best example of an accomplice is Dr. Shultz from Django Unchained. Sure, there are aspects of white savior-ness in his relationship with the eponymous character in the Tarantino Western - Dr. Shultz spends most of the movie at the center of conversations surrounding Django’s search for freedom. But he often uses his whiteness and the power his identity grants him to try to create a space for Django to act on his own agency in a world that seeks to silence and dehumanize him. Like many accomplices to dismantling injustice, Dr. Shultz focuses on leveraging individual power to tackle larger structures of systemic oppression.

This brings us to the crux of accompliceship - an accomplice must be willing to use their power (be it the privilege of race, being able-bodied, or body-size) to disrupt the systems that make life unfair for people at the bottom of the hierarchy. As Sonya Renee Taylor elucidates on this profoundly complicated topic in The Body is Not An Apology, writing, “Body terrorism is a hideous tower whose primary support beam is the belief that there is a hierarchy of bodies. We uphold the system by internalizing this hierarchy and using it to situate our own value and worth in the world.”

While an ally’s intentions are to make way for conversations around oppression, often allowing themselves to be a friendly ear for their marginalized compatriots, an accomplice is ready to get loud and make moves to topple the systems that oppress others once and for all.

I Don’t Need a Savior

If you’re looking for a cinematic example of the savior complex, you’re in luck, as there are enough examples to keep you in front of your screen for decades. There’s The Help, The Blind Side, Freedom Writers, Radio, and Hairspray, to name a few. If you aren’t familiar with this trope, allow me to regale you - a savior is usually someone who centers themselves in the conversation and seeks moral validation for their good deeds upon the “less fortunate” - while never actually interrogating or seeking to dismantle the systems of power in the first place. They place themselves as someone who assumes a “burden of leadership” to “rescue” minority or marginalized people from their suffering. They view themselves as someone who was sent to deliver others from evil - that this story is about them, and they are, in fact, the hero.

As I said at the beginning of this piece, I believe that everyone means well, including those with a misguided savior complex. At the heart of their actions, they want the same thing that the ally and accomplice want: for the systems oppressing marginalized communities to cease. Much like the accomplice, the savior is using their privilege performatively in order to achieve this end, but unfortunately, much like the ally, the savior has no direct impact on systems one way or the other.

In order to avoid having a savior complex of your own, you must be willing to submit to and check your ego. As Mary Frances Winters writes in Black Fatigue, “We do not want more band-aids in the form of programs designed to ‘“fix’” Black people. Black people are not the problem. Racist systems need to be dismantled... We need white people to acknowledge their complicity in perpetuating white supremacy and own their responsibility to dismantle it.” Oppressed people don’t need rescuing from our current situations; we need you to use your privilege to take down the systems oppressing us brick by brick.

The Road to Activism is Paved with Good Intentions

The ally, the accomplice, and the savior all want to use their privilege to make the world better. However, this cannot be accomplished without self-awareness, self-reflection, and a willingness to evaluate one’s place in all systems of oppression. Whether you are quietly supporting the oppressed on an individualistic basis, attempting to dismantle the larger systems of oppression, or floating somewhere between the two, know that the work ahead of you starts from within, and once you’ve tackled that, you are ready to be a real activist or change agent within your organization.