Self-Deception: Realizing I Am the Problem

by The Arbinger Institute

The following is an excerpt from the latest edition of the Arbinger Institute’s powerful book, Leadership and Self-Deception: Getting Out of the Box. Since its original publication in 2000, this book has become an international word-of-mouth phenomenon, selling more copies every year. The central insight—that the key to leadership lies not in what we do but in how we see—has proven to have powerful implications not only for organizational leadership but in readers’ personal lives as well.

The excerpt, taken from the third edition, is a conversation between Tom, the protagonist, and his new boss, Bud.

The Problems We Create

“Think of times when you’ve known that your wife needed the car next and you noticed that it was almost out of fuel,” Bud said. “Have you ever taken it home anyway, telling yourself that she could fill it just as easily as you?”

I thought about it for a moment. “I suppose I’ve done that, yes.” But so what? I wondered.

“Or have you ever promised to spend time with the kids but backed out at the last minute because something more appealing came up?”

My mind turned to my boy, Todd. It was true that I avoided doing much with him anymore. I didn’t think that was entirely my fault, however.

“Or, under similar circumstances,” he went on, “have you ever taken the kids where they wanted to go but made them feel guilty about it?”

Yeah, but at least I took them, I said to myself. Doesn’t that count for something?

“Or how about this one: have you ever parked in a handicapped-only parking zone and then faked a limp so that people wouldn’t think you were a jerk?”

“Absolutely not,” I said in defense.

“No? Well, have you ever parked where you shouldn’t and then sprinted from the car with such purpose that observers would think you just had to park there?”

“Or have you ever let a coworker do something that you knew would get him into trouble when you easily could have warned or stopped him?”

I had to admit, I had done that.

“I was a young lawyer working long hours at one of the most prestigious firms in the country. One of the deals I worked on was a major financing project that involved about 30 banks worldwide. Our client was the lead lender on the deal.

“It was a complicated project involving many lawyers. I was the second most junior member of the team and had chief responsibility for the drafting of 50 or so agreements that sat underneath the major lending contract. It was a big, sexy deal involving international travel, numbers with lots of zeros, and high-profile characters.

“A week after I’d been assigned to the project, Nancy and I found out that she was pregnant. It was a marvelous time for us. David was born eight months later, on December 16. Before the birth, I worked hard to wrap up or assign my project so that I could take three weeks off with our new baby. I don’t think I’ve ever been happier in my life.

“But then came a phone call. It was December 29. The lead partner on the deal was calling me. I was needed at an ‘all hands’ meeting in San Francisco.

“I was crushed. The thought of leaving Nancy and David alone in our Alexandria, Virginia, home left me desperately sad. It took me two days to wrap up my affairs in DC before I reluctantly boarded a plane for San Francisco. I left my young family at the curb at Reagan National Airport. With a photo album under my arm, I tore myself away from them and turned through the doors of the terminal.”

“By the time I arrived at our San Francisco offices, I was the last one in on the deal. Even the guy from our London office beat me. I settled into the last remaining guest office, which was on the 21st floor. The deal headquarters, and everyone else, was on floor 25.

“I hunkered down and got to work. Most of the action was on 25—meetings, negotiations among all the parties, everything. But I was alone on 21—alone with my work and my photo album, which sat open on my desk.

“I worked from 6AM till after midnight every day. Three times a day I would go down to the deli in the lobby and purchase a bagel, a sandwich, or a salad. Then I’d go back up to 21 and eat while poring over the documents.

“If you had asked me what my objective was, I would have told you that I was ‘drafting the best possible documents to protect our client and close the deal,’ or something to that effect.

“Was I Really Committed?”

But you should know a couple of other things about my experience in San Francisco.

“In fact, after 10 days of lobby deli food, I found out that food was being served around the clock in the main conference room on 25 for everyone working on the deal. I was upset that no one had tole me about it. And twice during those 10 days I was chewed out for failing to incorporate some of the latest changes into my documents. No one had told me about those either! Another time I was reprimanded for being hard to find. And on two occasions during that period, the lead partner asked for my opinion on issues that had never occurred to me—issues that would have occurred to me had I been thinking. They were in my area of responsibility. He shouldn’t have had to do my job for me.

“Now, let me ask you a question, Tom. Just from the little bit you now know about my San Francisco experience, would you say that I was really committed to ‘drafting the best possible documents to protect our client and close the deal’?”

“I Had Become a Problem”

“No,” I said, shaking my head, surprised at the ease with which I was about to harpoon Bud Jefferson. “It sounds like you were preoccupied with something else. It doesn’t seem like you were engaged in the project at all.”

“That’s right,” he agreed. “I wasn’t engaged in it. And do you think the lead partner could tell?”

“I think that after those 10 days it would have been obvious,” I offered.

“He could tell well enough to chew me out a couple of times at the very least,” Bud said. “How about this: Do you suppose he would say that I’d bought into the vision? Or that I was committed? Or that I was being maximally helpful to others on the deal?”

“No, I don’t think so. By keeping yourself isolated, you were putting things at risk—his things,” I answered.

“I have to agree with you,” Bud said. “I had become a problem, no question about it. I wasn’t engaged in the deal, wasn’t committed, hadn’t caught the vision, was making trouble for others, and so on. But consider this: How do you suppose I would have responded had someone accused me of not being committed or not being engaged? Do you think I would have agreed with them?”

I pondered the question. “I doubt it. It’s kind of tough to agree with people when they’re criticizing you. You probably would have felt defensive if someone had accused you like that.”

“And consider the defenses I would have levied,” Bud said, nodding in agreement. “Think about it: Who left behind a new baby to go to San Francisco? I did. And who was working 20-hour days? I was.” He was becoming more animated. “And who was forced to work alone four floors below the others? I was. And to whom did people ever forget to mention basic details like food plans? To me. So from my perspective, who was making things difficult for whom?”

“Hmm, I guess you would have seen others as being the main cause of the trouble,” I answered, finding the irony interesting.

“You’d better believe it,” he said. “And how about being committed, engaged, and catching the vision? Do you see that from my perspective, not only was I committed, but I just might’ve been the most committed person on the deal? Because from my point of view, no one had as many challenges to deal with as I had. And I was working hard in spite of them.”

“That’s right,” I said, relaxing back into my chair and nodding affirmatively. “You would have felt that way.”

“So let’s think about it again.” Bud rose again and began pacing. “Remember the problem. I was uncommitted, was disengaged, hadn’t caught the vision, and was making things more difficult for others on the deal. That’s all true. And that’s a problem—a big problem. But there was a bigger problem—and it’s this problem that you and I need to talk about.”

He had my full attention.

“The bigger problem was that I couldn’t see that I had a problem.”

Bud paused for a moment, and then, leaning toward me, he said in a lower, even more earnest tone, “There is no solution to the problem of lack of commitment, for example, without a solution to the bigger problem—the problem that I can’t see that I’m not committed.” 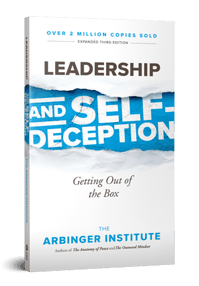 For more, check out the latest edition of Leadership and Self Deception here.

The Arbinger Institute is a worldwide training, consulting, and coaching organization whose programs and methodologies are based on forty-five years of research in the psychology of human behavior and motivation and more than thirty-five years of experience working with organizations worldwide. Headquartered in the United States, Arbinger has operations around the world, including throughout the Americas, Europe, Africa, the Middle East, Oceania, and Asia.