My story as a BK intern

I started at Berrett Koehler as an unpaid sales & marketing intern in the Fall of 2012. At the time, BK was no exception to the industry-wide rule of unpaid internships.

Like many millennials, I knew how crucial an internship was for my career, especially as an English major looking to break into an industry already overfilled with graduates from the humanities. I researched and applied to many internships before finding BK, and yet not a single one offered financial compensation. But I needed something to help build my resume, which so far only showcased my retail and customer service experience.

I loved being a BK intern. I felt welcomed right away by the staff, and I sensed an organizational warmth that I had always wanted from a work environment. And I knew the experience I was gaining -- which went above and beyond typical intern tasks like coffee runs and envelope stuffing -- would help to launch my career. But the lack of pay took its toll. The cost of living in the Bay Area is high. As a broke college student, I had to maintain a second part time job just to stay afloat. I was splitting time between my internship, my part time job, my full time class load, and, well, sleep, if I happened to have a moment to spare.  I was exhausted and running on fumes.

My days of just barely scraping by ended in 2014, when I joined BK full-time as a publicity assistant. I was incredibly excited to have broken into the industry, and enormously grateful to BK for having not only given me the chance to learn and grow, but for having gone on to hire me as a staff member.  And yet, I was keenly aware that many unpaid internships do not have such happy endings.

As a publicity assistant, a portion of my duties were dedicated to hiring and managing interns for my department. And I worked with some amazing interns. Helping them to find the build the same skills I once built as an intern felt like an incredible privilege. But I saw the same struggles I experienced as an intern, amplified. Not only were many interns running ragged between their studies and part-time jobs, many incredible candidates were unable to even apply because of the lack of financial compensation. How could we deny those who couldn't afford to work an unpaid internship the type of resume-building experience they need to break into the industry?

A year into my tenure as a full time staff member, I finally realized something : unpaid internships have no place in creating a world that works for all. It is totally inconsistent with the BK mission to create positive change on individual, organizational, and societal levels.

On an individual level, unpaid internships disproportionately affect those who come from low socioeconomic backgrounds

Affluent interns can work in an unpaid position while family members sustain them financially. A study by The Chronicle For Higher Education (and cited by the Brookings Institute) suggests that internships are the biggest factor in hiring recent college graduates. As a result, anyone who lives across the intersection of poverty and other marginalized positions (people of color, first-generation folks, etc.) bears the brunt of this unfair structure. You can’t curtail generational poverty when the path to future career success jeopardizes your basic needs in the present. I knew the difficulties of meeting these needs firsthand.

On an organizational level, exploiting unpaid interns is a disastrous business model

The recent slew of lawsuits filed against businesses who do not pay interns makes this abundantly clear. In 2010, two unpaid interns at Fox Entertainment working on the set of Black Swan sued Searchlight Studios, claiming Fox broke the law by mandating their interns perform work with no financial compensation or educational value. Their lawsuit highlighted numerous violations of the US Department of Labor’s six criteria for unpaid internships. Five years later, Fox finally decided to settle outside of court. They are now are set to reimburse all unpaid interns who worked for them as far back as 2005. This is hardly the way to go about building millennial leadership, or attracting new and diverse talent.

On a societal level, unpaid internships contribute to unequal representation in the professions where our national policies are shaped

Many politicians come from upper class backgrounds. Washington D.C. matches the general industry tendency to offer unpaid internships. If the vast majority of our politicians enter the industry when they can afford to work for free, is it any surprise to see an unequal representation in our Congressmen, Senators, and federal lawmakers?

So, back to my story

It was clear BK's practice of unpaid internships was out of alignment with our mission to create a world that works for all. With all this swirling in my head, I was set out to make a change.

First, I needed to create a proposal. I knew right off the bat that diversity and inclusion was one of the key components I wanted to focus on. Like I mentioned earlier, unpaid internships disproportionately prevents entry for many people from already disenfranchised communities (LGBTQ+ , many people of color, and more), who cannot afford to — and should never — work for free. Back in 2014, BK had officially formulated a Diversity and Inclusion committee for the first time in the company's history, so paying our interns was a clear opportunity to put our values into practice and make a change.

But navigating confusing and sometimes contradictory information about the legal and business considerations of paid internships was difficult. And I knew it might be hard to justify additional monetary obligations in an industry already bogged down by major financial strain and future uncertainty.

So for guidance, I turned to our board of directors chair Praveen Madan, and our VP of Business Development  Johanna Vondeling. I also worked with  BK author Maya Schenwar, editor in chief of TruthOut.org, to learn about how TruthOut’s paid internship program developed over the years.  They all gave invaluable support to this effort, and I'm indebted to them for their direction, time, and many useful suggestions.

As BK was going into its planning for 2016, I presented a formal proposal to create a paid internship program. Because of our unique democratic decision making process, the entire BK staff had to vote to approve. And thankfully, they did. 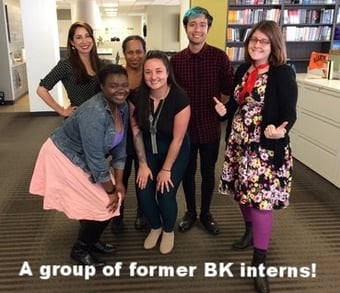 And it sure paid off! The program has gone on to attract interns from a wider array of socioeconomic backgrounds, bringing in new and valuable perspectives. Much of BK's new talent has historically come into the organization via our internship program -- but our first ever ever paid intern, Liz McKellar, would not have been able to continue with us if the program did not offer financial compensation. Liz first joined us in late 2015 as a recent college graduate, looking to find publishing experience in the interim before going off to England to get her Masters in literature. She worked as an unpaid Communications Intern for a couple months, but the high cost of living in the Bay Area meant her internship would need to be cut short.

Thankfully, the paid program went into effect just in the nick of time at the beginning of 2016, and Liz continued for a few months as a paid intern until a long-term staff position opened up. We are privileged to have her now as a full-time employee (sorry England, you're on the backburner), a position in which she has made vast contributions to BK  across many organizational layers. Her story illustrates how paying interns expands our hiring pool to include not only undergraduates, but also any adult-aged person seeking publishing experience. Most college students have access to student loans that can sustain their living expenses throughout their years in school. But recent graduates or those not in school don't have the same institutional access to the financial cushions a state school or university offers.

Similar to Liz, former inter Kate Dolan was a college graduate from Glendon College in Toronto, and was living in San Francisco when she joined us as a Communications Intern in 2017. She struggled to find enough employment that could sustain her amidst the city’s astronomical rent prices. But because we offered compensation, Kate was able to remain with us for the duration of her internship and still make ends meet. She did great work during her months at BK, and it seems it was time well-spent for her personal career as well: she now works for Ulysses Press as their junior publicist! Kate’s entry into the publishing industry would have been severely compromised had she found no internships that afforded her even basic financial sustenance.

Despite this powerful change at BK, there is still work to do. Publishing is an industry that has the influence to move global levers of thoughts and ideas. But there is a rampant inequity that must be addressed industry-wide. BK took one small step forward with our paid internship program. But we can always continue to raise the bar.