4 Reasons Why Remote Meetings Are Hard

by The Berrett-Koehler Team

“Vulnerability is hard and it’s scary and it feels dangerous.” - Brené Brown

When we think about meetings, vulnerability is one of the first words that come to mind for us. Brené Brown defines vulnerability as, “Uncertainty, risk and emotional exposure.”  As you walk into a meeting, outcomes can be uncertain, the process for achieving them may be unclear, and if you’re really attached to the outcomes - there is a degree of emotional exposure you will probably endure to defend what you value. 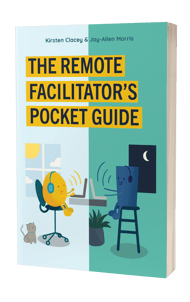 Remote work has become the new normal, especially in the age of COVID-19. In this adapted excerpt from Kirsten Clacey and Jay-Allen Morris' forthcoming book, The Remote Facilitator's Pocket Guide, they outline four major roadblocks that get in the way of productive meetings.

Meetings are one of the most common mechanisms for collaboration and house immense potential for organizations. High quality meetings directly influence an organization’s ability to achieve its outcomes. At the same time, meetings have the potential to be profoundly vulnerable spaces. Perhaps this is one of the main reasons that so many people struggle with remote meetings: a cocktail of factors, such as technical barriers and invisible group norms, increase the uncertainty and risk of an already vulnerable space.

We facilitated a co-located software engineering team working on their company’s core back-end technology. The team had the autonomy to choose how they worked. One of the decisions they made was to work from home one day a week because most team members had long commutes to work.

Their in-person meetings flowed; despite two individuals being more outspoken, differing opinions were voiced and heard. Light-hearted comments were passed and more often than not, outcomes that the team believed in were reached...except on remote days. The same team, in a remote setting often lost their sense of humor, and despite desires to be otherwise, found themselves in meetings which often felt tense and awkward, with the two more dominant voices occupying a lot more airtime than usual. The team was frustrated that their remote meetings felt less engaging and a lot more draining.

Some of the above might sound familiar. Perhaps you’ve witnessed dynamics shift in a remote space. Despite the trust built over their two years of working together and their shared commitment to succeeding with remote work, remote meetings were difficult.

As we explored how to improve these meetings, the challenges we were experiencing became more clear:

While it is easy to replace explicit norms, the implicit norms which guide behavior are difficult to identify. For example, it is usually quite easy to sense if someone would like to speak if you see them breathe in, lean forward or raise their hand. Even if the group re-establishes new ‘remote’ norms and chooses to keep their videos on or use a ‘raise hand’ mechanism, the experience is not the same. As social beings, a lot of our interactions are guided by intuitions rather than overt rules. Replacing all the subtleties that help us navigate social interactions is really difficult.

In the co-located meetings, the team would mix their communication styles by speaking, using sticky notes or writing on the physical board. Unintentionally, this subtle action provided alternative communication mechanisms and leveled the playing field for different kinds of thinkers. People who needed time to think before speaking (typically the more introverted team members) were able to write their thoughts down. Contrasted with the remote calls in which 100% of the communication was often verbal, some people experienced the space as significantly more stressful. The absence of visuals can often result in biases towards certain kinds of thinking.

Each time someone missed something that was said, asked for it to be repeated or worse, gave up trying to hear - the flow and focus of the meeting changed. With each interruption, frustration rose.

To convey an idea in person, participants could draw on whiteboard or use hand gestures to provide additional information that might be difficult to convey with words. To do so was relatively easy and quick. The team lost this ease of communication because they had to seek and prepare alternative tools, which felt less fluid and accessible.

The small things we overlooked and took for granted in person, became more obvious in a remote space. The change in environment changed behavior. If unaddressed, that change could have led to the formation of unhealthy behaviors and mindsets about meetings.

A skilled remote facilitator can help guide the formation of new norms for expressing intention to speak, provide tools for nonverbal communication, make technical interruptions less frustrating, and help instill the team with the patience needed for the additional effort communication takes. To learn more about these tools, check out The Remote Facilitator’s Pocket Guide, forthcoming from Berrett-Koehler Publishers, and will be available in multiple formats; print (we're still shipping!), ebook, and audio.

3 Keys to Thriving for Women of Color Leaders